Self-replicating computer worms are an ideal way for cybercriminals to spread malware and infect countless computers. Unlike a virus, a worm attacks ports and protocols of vulnerable systems and therefore does not require a delivery system. When a computer worm infects, it allows criminals to steal private data, execute distributed denial of service (DDos) attacks, and can wreak havoc on personal and enterprise level operations.

Related Video: What Are DDOS Attacks?

The first self-replicating computer program began in 1988 as an experiment by a Cornell University graduate student, sent out to collect data from internet servers. Although the worm was not intended to be malicious, it replicated and tore through roughly 60,000 Unix-based machines. This created a massive denial-of-service attack on the internet.

The attack led to the first criminal conviction under the Federal Computer Fraud and Abuse act. The “experiment” lead to a $10,000 fine, probation, and community service. More impact-fully, however, it led to Cybersecurity fields and a new awareness of cybercrime. Worms and viruses are particularly easy ways to spread criminal malware. These attacks took full force in the 1990s and early 2000s and continue to adapt to our changing technologies and mobile devices.

Not only could malicious computer programs be used by Ivy League grad students, but they also became a global threat, as they could be used to collect national intelligence and state secrets. The U.S. Department of Defense had numerous instances with nations such as Russia and the People’s Republic of China for various attacks against the U.S. government. These attacks, however, were not mere computer worms, but a new attack known as Advanced Persistent Threat (APT).

Early APTs were very stealthy, with unique signatures. Very few networks had the technology or methods for detecting these attacks, let alone stopping them. The number of these attacks against high tech companies and defense contractors increased dramatically.

APTs maintain a slight distinction from that of cybercriminals. Government security services have been known to outsource work to hacking groups as intelligence techniques. However, criminals often ride the coattails of APT, making the line between criminal and nation-state activity very thin. 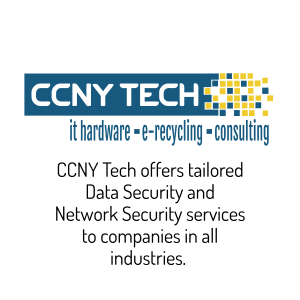 The significance of the first computer worm could never fully be evaluated. Not only did it create a new type of criminal, it created a massive need for cyber defense. Today, security patches, updates, and new techniques are a normal part of our everyday lives. Still attacks are adapting, advancing, and growing in number. Cyber crime is a very real threat to all individuals and enterprises.

It is crucial that all companies invest in cyber security. Many small and medium-sized businesses believe that only large enterprises are at risk; however, this is not the case. Cyber crime is not limited to size or industry.

CCNY Tech offers tailored Data Security and Network Security services to companies in all industries. We will create a solution that fits your exact needs and keeps your company and customer data secure. Message us through our website or call us at 315.292.1046.